- March 26, 2008
A lean week at work.
The kids have not been going to playschool this week. Mira is just recovering from fever and an upset stomach. She had to be taken to hospital on Monday evening.
And we are plannning to send Ash to Kerala in a week's time. He has not been keeping well - eczema, poor eating, tantrums - and we hope our parents can get him to put on some weight and also some discipline into his life. He will have plenty of place to run around and be one with nature.
I am hoping he wont miss us and start crying. We have talked to him about it and he seems to be ok wit the idea of going there. He repeats after me: "There is Moma chechi (the tenant's daughter), there is Beena aunty, there is Appacha, Ammachi" This stint in Kerala might be at Changanachery, V's place. Or else he'd be saying: "There is Bruno (our dog), there is kockacko (hens), Appacha, Ammachi..." Though my place in Kerala would be a bit more lonely for him as there are no kids there, only hens and dogs and fields.
But Vinod has not been taking any decision about how and when he wants to travel with Ash, so I am in no position to book tickets for them. I always like to plan my travel in advance, while V does it last minute. It could also be a stalling tactic of his, to decide against sending Ash away. A doctor once told us that sending kids away to grandparents is escapism. I admit I am an escapist. 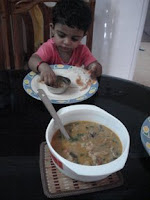 We had rains for a few days and now it is as hot as ever.
Easter was quiet. There were no guests, just us. A cousin and her kids from Bangalore paid a flying visit. Vinod went alone for the early morning mass inspite of the priest's appeal to all those who attended the GF mass that they shouldnt miss Easter mass - or it would be equal to thinking that Christ did not rise from the dead.
p.s. The above post has been rehashed from an email message. :)
ash Mira

Anonymous said…
hi, good to hear from u.hope M's fever/stomach pro is over..
regarding Ash-whether here or there someone has to watch his diet..for eczema ...food on time helps .. and not much of cookies or stuff..eggs/fish etc cut off..
i find if i don't i have to deal with trantrums,eczema ..more etc
good luck..
ust
26/3/08 6:05 pm

the other romila said…
I dunno how all of us inherit this socially induced guilt. Personally, I have enjoyed my vacations thoroughly at my maternal grandparents' place. Though my paternal grandparents used to chide my parents for it.

But I remember having great fun with cousins and grandparents. And it is one time when you really get to know them well. And trust me, the love to dote on grand kids.

Romila said…
Wish I can be an escapist too at times...but my parents are too far way for my daughter to travel to and fro.

Yes, Don't feel guilty about it. Sometimes, it's good for us parents to be by ourselves, and the kid will have an enjoyable experience, away from concrete buildings and busy parents always telling 'em what to do and what not to do. Grandparents pamper them and that'll do them good once in a while..
28/3/08 4:08 pm

Ladybird said…
Yeah, the dr told us that we shouldnt have had children if we didnt have the time to look after them and had to send them away to grandparents. But I guess I am a bit selfish, i need some me-time at home which i am not getting at all.
Each time I speak to my dad he tells me that I am ruining Ash's life keeping him here with maids, and not having the time to give enuf attention to him. Also, as parents exhausted by work and commuting, we are on our nerves' ends and have no patience to handle the kids.
28/3/08 4:44 pm