- February 10, 2008
I dont remember when I last went to a circus - probably when I was in high school. But those were days when television did not rule our lives the way it does now. Circuses were one of the prime means of excitement and entertainment especially for country bumpkins. But in these days and in cities, there are other means of entertainment and a circus is not the first option for a Sunday outing. But go we did yesterday to the Great Bombay Circus held in a ground behind the Central railway station. We thought it would be a different experience for the kids, whose main idea of an outing is a beach or a mall. 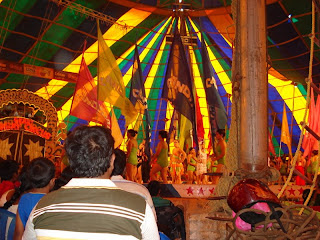 What I like best about circus are those fair pretty women in their shiny, short outfits. Once upon a time, they were a fascination for me. They were like the apsaras living in a world I thought was heavenly and performed like gymnasts on the ring. I wasnt disappointed yesterday either - the first item was by three girls in glittering yellow costumes. I also realised that the circus beauties hadnt lost their charm on me. I marvelled at their costumes and their antics - but with a tinge of sadness knowing that their lives were not as glamorous as it looked on stage. Especially when an artiste failed to achieve her goal - of netting a ball into a small bowl-like net atop a contraption she balanced on her feet, lying on her back - and V said: I am sure she is going to get whipped for this. She made it in her 3rd (or was it 4th?) attempt. 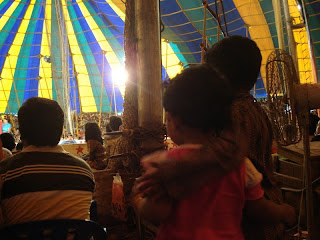 Now look at the brother-sister duo watching arm in arm! The kids werent as taken in by the events as we had hoped but some of the numbers caught their fancy - especially 2 bikers riding inside a huge circular thing. The sound system was bad so we couldnt make out what each item was called and what they involved. But the music that accompanied each item belonged to some Hindi film numbers, I think. Though I am told the Great Bombay Circus hasnt come from Bombay (Mumbai) - it is owned by a guy from Kanjirapalli, who has 3 other circuses to boot. I am saying this because this guy was a classmate of V's cousin, whose trip to the circus last week had made us want to make it too on Sunday afternoon. 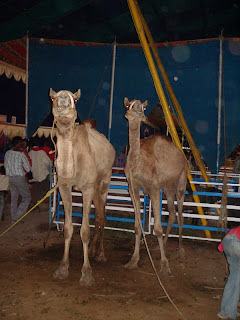 There are no wild animals on show now - I mean, lions and tigers. We only got to see camels, horses, pedigreed dogs, parakeets and an elephant playing ball - not kicking, but batting sixers at the audience. I liked the camels with their half-sleepy and smug looks. 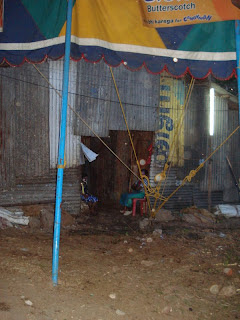 But as we walked out, I was saddened to see the tin-sheds in which the artistes lived in. There were a couple of clowns sitting outside, looking tired and sad.

There were quite a few White women performers, probably East European, judging by their good looks. There were many of the Mongoloid stock too, could be from north-east India. 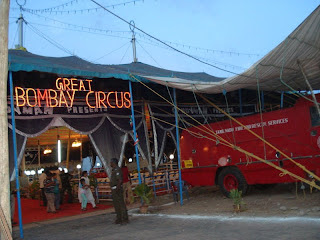 A fire engine waited outside. People were already queueing up to enter for the next, and last, show. The show timings are 1, 4, 7 p.m. and last over 2 hours. 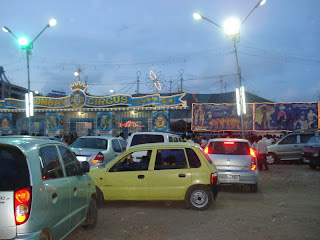 The only spoilsport were the hawkers selling icecreams, chocolates, cooldrinks and the like and often blocked our view apart from enticing kids to try their stuff (sold at double the MRP). At least in olden days, we could watch in peace but here business was mixed with pleasure. Mira missed a good part of the show while relishing an 'Iceberg' icecream. The event was sponsored by Candyman, so the elephant, the camels and the attenders were draped in branded clothing!

the other romila said…
Oh....brands on animals??
brandalism there....must tell my friend who is working on a paper on that.
good to know of the circus visit, the natural history section of the museum must also interest the kids....cheers!!
12/2/08 4:19 pm