- December 29, 2007
I like to plan my holidays in advance and pack my bags in advance too. This time too, I managed to book my tickets two months in advance but the packing couldnt be done until 16th Sunday morning, the day I was leaving.
The previous night the church carol service visited our house and we just about managed to reach home some 10 minutes before it arrived. Consequently I couldnt retrieve my camera to capt 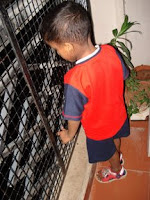 ure the carol singers and the Santa Claus - who terrified the kids no end though he gifted them Kitkat bars - with the result that Ash had a new demon other than Spiderman to be petrified of. (That's Ash watching the carol singers drive away.)
The journey was uneventful save for the racket the kids made in the train but the other ladies in the compartment had been sporting enough to tolerate them. For once, both kids ate their dinners without prodding but getting them to sleep was a feat for me.
On the first day home, we rested our weary bodies but on the second day, my aunt and me decided to do our early morning walk. Dad suggested a route that had less traffic and it suited us fine. I had been wanting to trudge the path we cousins once took to our vacation classes, and it suited my aunt fine too. 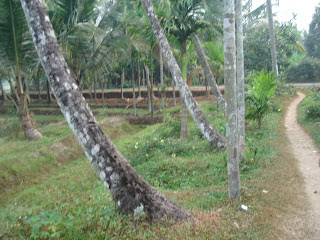 We went as far as there was a decent pathway and then headed back. 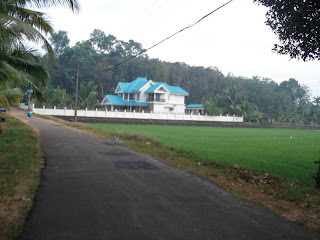 We then decided to walk up to the Kuttikunnu school, where my aunt studied. I had never been to the school that had been the alma mater of most educated (and half-educated) Chandanapallians. In olden days it was the only high school in the area though now there are two other secondary schools in the village. It belonged to the Therakath muthalali, one of the richest men in the place. But apparently the school has been bought by a Gulf-returned entrepreneur from Pandalam now. 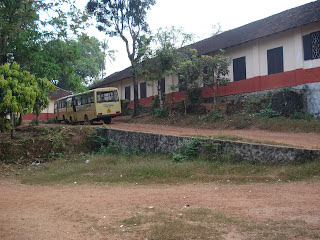 The school hadnt opened as it was early morning but the school bus drivers were in. One of them came up to us to check why we were clicking snaps. Old students, we said. "Would you like to meet the Principal?" he asked. "Not really. We wont be here that long," we said and went on our ways.
To be continued...