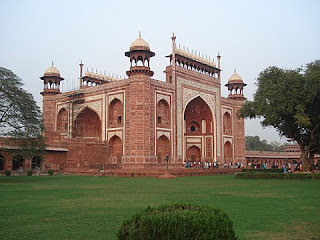 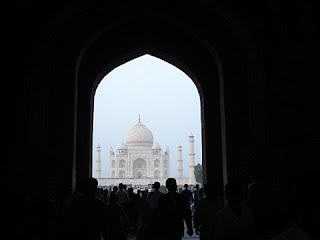 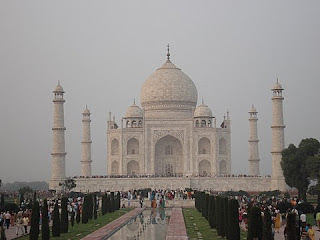 Vinod went to Agra and to the Taj Mahal, one of the wonders of the new world. The first picture is of the gateway to the Taj.

I have been to the Taj twice, while I was studying/working in Delhi - with my father and then with my brother. I need to go with my husband and kids next.

On both occasions, I had taken a tour operator's bus service to Agra. It first took us to the Agra Fort, which is magnificent. I particularly felt overjoyed when I visited the room of Shahjahan's daughter Princess Roshenara, after whom my maternal granpa, a captain in the Indian Army, named me.

The guide we had on both occasions spoke hilarious English. An Australian tourist at the Agra Fort sought my help to understand what the guide was talking all about. And when it was time to have lunch, the guide said: "You cant make love on an empty stomach, so let us stop for lunch (what he meant was you cant enjoy the monument of love, the Taj, on an empty belly)."

The only spoil sport of those special tours was the stop at Mathura on the way back to view the controversial birthplace of Lord Krishna and a spirited swami who acted as our guide at the place. I didnt go into the makeshift temple on both trips because I didnt want to leave my precious sandals behind, so I stood outside and watched in sadness the fortified historical mosque next to it. Me and my brother loitered around the dusty, dirty town till the other tourists returned. The swami, for his part, jumped into our bus and went to each and everyone to collect money/tip - some were very generous while others were not so (in which case the swami made a snide remark before going to the next person).

But, to tell the truth, I wasnt swept off my feet when I saw the Taj. I was saddened to see the black incomplete structure across the River Yamuna, supposedly the Black Taj, Shah Jahan's own mausoleum, if his son hadnt imprisoned him and usurped the throne before he could complete it. But anyway I can brag that I have seen India's most beautiful monument twice in my life.

Anonymous said…
hi, i was also lucky to see the Taj twice. but was saddened with the fact that the road to such a place was so small and congested.. the pollution causing the marble color to change.. river was not full when we went.. and as u said to see the other buildings around it neglected.
they were renovating Taj while we went and the fort was not on our trip.. as we wen t alone.
take care ust
20/11/07 6:46 pm

Ladybird said…
And if you go dont forget to buy Agra pethas made from cucumber. They are delicious. Try the Panchi petha store (www.panchipetha.com - the site seems tobe under construction) - we are having our fill of 2 varieties of cucumber pedas now. :)
21/11/07 4:49 pm

Anonymous said…
That was 1996. long time. panicker travels. remember that crazy sadhu hindu bigot who was giving commentry at mathura. that was a nice trip.
you also got me my first quo vadis chappals...i think i blew your budget at that time :) Kochumon
22/11/07 12:21 pm