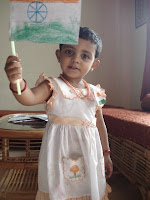 My dad is in town. He is here till Tuesday next. I think he has come mainly to see the kids, especially Ash.

And the grandson got to see him only after he returned from school. He immediately asked where his granny was and not believing him, went looking around the house for her.

Mira has been telling us that she plans to leave with him to Kerala. For the kids, any place other than the little jail of an apartment is welcome. 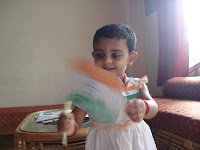 In fact Ash had told me the previous night that he wanted to go to Kerala to study as the kids (pillaar as he calls them) were bullying him in school, in the van etc. I am a bit skeptical - the last time I asked the van ayah about the bullying she said the so-called victim was actually the accused.

Today the kids have leave since it is India's 61st Independence Day.

Ash came home yesterday with a lil flag (in picture in Mira's hand) that he had colored orange and green; when V asked him why he didnt colour the white he said, the paper was white anyway (whom do you think you are kidding, Mister?)