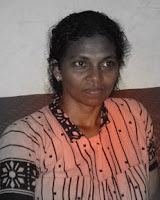 Introducing our new maid from Kerala.
Kochumol (KM) is a Dalit Christian who attends the CSI church in her husband's native place near Punalur. Married (on her own whim) at the age of 15 to a good-looking but good-for-nothing loafer whose main preoccupation is boozing, she has had the burden of looking after her family when many others her age were still in school/college. She has given birth to three but only one, the middle child, survived. She says her aim now is to make some jewels for her school-going daughter who is almost 18 and will soon be of marriageable age.
She has worked as a daily wage labourer (who earn Rs.175 a day without food and Rs. 150 when food is provided by the employer) and as a maid. She even had a two-year stint in Muscat, working as a maid in Arab households. Her agent had collected Rs.25000 from her (of which 15000 was deducted from her salary) for the travel documents, airfare and visa. The agent collects the same amount from each Arab employer she is sent to. In two years, she was shunted to three households. She tells me that only rich Arabs can afford to keep maids from Indian agents. As for Indians working in the Gulf, they get cheaper services from Bangladeshi and Filipino maids. The Arab masters of hers had been decent, not lecherous. Each household had a dozen kids, the older ones looking after the younger ones. So she had to take her of only the cooking, which she learnt, and other household work.
The agent has told her that he will send her again if she brings the visa and assorted fees, but she says she doesnt want to go with a grown-up daughter back home. We found her through her elder sis, who works for my aunt.
She is not very talkative except when talked to. (And this time, I have not taken too much interest in talking as all the earlier maid escapades have made me sore.) She is a keen reader - of the vernacular daily and magazines - and a fan of TV serials (though Ash restricts her TV time with his Pogo watching).
There is a beauty in her dark face. Her black eyes light up at times, and there is almost a smile on her lips. But on the whole, she strikes me as a person who has been benumbed by the bitter experiences in her life and whose heart had hardened, which is not a good thing when you looking after two small children. For instance, she just ignored Ash as he howled the house out on Saturday night complaining of ear pain - the ENT had dewaxed his ears in the evening but the pain set in late in the night.
p.s. Ash might need a small surgery to remove his swollen adenoids. The earlier the better, the ENT said. But the dermatologist has asked us to wait until the test results come on the 5th. We might fix a date for the op after the 10th of March. Should we beware the Ides of March?
adenoid Maids

Anonymous said…
hi, check about the need for surgery.. i checked out the website u sent with it..
maid sounds like she did have all the luck one can get..t ake care ust
4/3/08 7:01 pm