- December 31, 2007
My aunt's house is close to the Buchanan's group of schools. The campus looks huge and mysterious. Someday I must walk up there - I hear chain snatching and other minor theivery is not uncommon in the school's vast rubber plantation. The place also reminds me of that little schoolgirl who burnt herself to death inside her beloved school unable to bear the torture of her drunkard father and scheming grandma. The girl's mother now works for my aunt.
Kottayam town where we went for lunch looked festive - Christmas decorations rivalled for space with party (read CPI-M) banners. 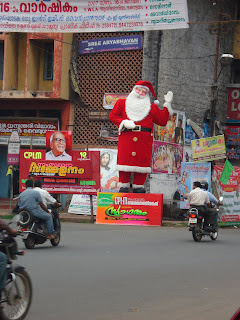 One thing about Christmas in Kerala is that every house, be it a Hindu's or even a Muslim's, has a paper Christmas star in front. Shops displayed the 2007 innovations in star designing - some looked funny, even horrendous. Christmas trees seem to have gained popularity with many houses having a decorated tree in front. Catholics of course never forget to have a nativity scene in place too.
My cousin Renjith landed the next day, and we all went on a boating expedition on the Vembanad lake off Kumarakom topped by tea at Radisson Plaza, the latest in 5-star luxury at Kerala's most happening tourist spot (the chalets here charge Rs.60,000 a day, when the Taj - Arundhati Roy's History House - charges Rs. 10,000 for a day's stay. 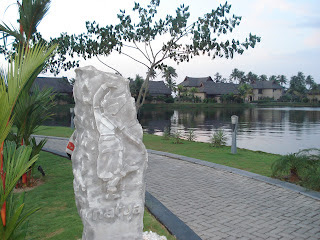 The lake was too weedy for the motor boat to navigate at will, but we did get to see many migratory birds resting on the 'African' weed - cormorants, snake birds, sea gulls etc. Tourism is taking its toll on the lake - plastic bottles in the lake, waste from the houseboats... 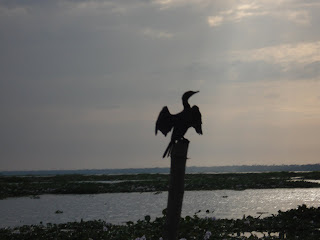 We hopped off the boat near the bird sanctuary area and took the long beautiful and serene path through dense foliage to reach the entrance. The kids walked all the way back. 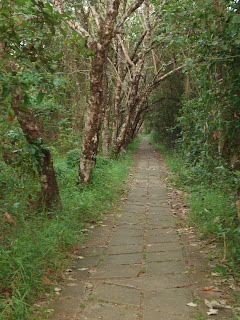 Robin and Tulika arrived on 23rd but I could not go back to Chandanapally until Christmas noon, since we had planned an outing at Veegaland near Cochin on the 24th with V's brother and family. It turned out to be a fun day though the holidaying crowds were daunting. The ride from Changanachery to Ernakulam on the Aleppey road was smooth but the Cochin-Kakkanad road was real bad. Kakkanad should have better connectivity and the "Smart CM" who made Smart City possible should look into this considering the real estate boom the god-forsaken place is now witnessing. 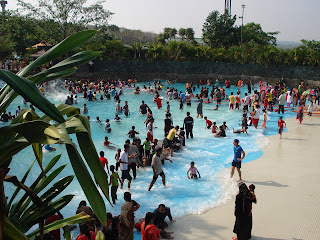 The only thing that spoiled our Christmas day revelry was an accident we witnessed on the road - a woman who jumped in front of a car in a nervous attempt to cross the road and broke her nose and lost consciousness. The car that hit her had to rush her off to the hospital. I hope she survived.
We went once again to Kizhakevayal and the Kodumon rubber plantation, the biggest in Asia. Encroachers and land grabbers of yesteryears now live in harmony with Kerala's money-minting tree.
V also found time to take us along on his usual pilgrimages - to the Parumala church and to his many relatives, distributing plum cakes to each like Santa. And we did not have time to rest until we boarded the Chennai Mail on 26th evening, running an hour late.
The end.

Sam said…
Chandanapally's chronicler, it is getting interesting. You make it look like Aymanam country.
3/1/08 12:26 pm