- December 13, 2007
Yesterday Vinod caught me smiling at myself in front of the mirror - not once, but twice. "What's wrong with you?" he wanted to know. Yeah, all was well at home as long as I was grumbling and scowling. I didnt have the time or inclination to smile at anybody else, let alone myself. So he had a reason to be suspicious.
It must be the BP tablets, I tell him. I feel a bit more relaxed now. Ash's tantrums doesnt make me feel agitated so much now.
But I wonder how my aunt, who came down yesterday from Nigeria, is taking it. I was very embarrassed until she told me today morning that her son had been like this until he was some 7 years old. (Renjith, are u listening?) She tells me that boys are like this. I still remember my aunt whacking her son for not eating when he was Ash's age. 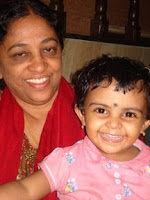 She happens to be one of my favorite memories of my childhood. I still remember eating from her plate or her making balls of rice for me to eat. I call her kochammama (little aunt) and she was there at home the first three years of my life - then she got married. She was probably at home a few years later too, because she used to take me by bus to the primary school I joined in Class 1. I used to cry myself hoarse when she dropped me and went off home.
And today, I had my kids going up to her to brush them, feed them etc. Mira, who generally doesnt go to strangers, seems to have taken to her right from the beginning - blood is thicker than water, I must say.
p.s. I know what you will say: "Ahem, another picture of Mira." But she likes to pose, whereas Ash likes to be behind the camera - to see the images on the camera screen. Maybe someday he will become a cinematographer/director?

Joyismygoal said…
I love thatyou are smiling It is nice to be happy. I am back online!!!! thank you for your sweet words i am in the process of deciding if I will take BP meds trying to work on it for a month first and we will see:> May i ask how old you are? and will you have to stay on they forever?
13/12/07 7:28 pm

Romila said…
Good to see you all smiling. And you do have a really good memory to remember episodes in the first three years of your life.

Ladybird said…
I can remember certain incidents from diff. stages in my life.
Maybe u noticed that I took ur advice about the title - Cheers!
14/12/07 5:49 pm

Grousewife said…
I have stumbled on to your blog at last and it is really reassuring to know that your son also throws tantrums and you also get upset with it.Plz tell me if you have ever felt jealous of someone reg V?
14/12/07 10:42 pm

the other romila said…
Rosh.....you have a diva for a daughter and a son, who sounds like an auteur. Get ready to produce some flicks~!
my dad had to shell out heavily for my dissertation films - they were duh! I came back to print because it was cheaper!
But I hope your money wont go in vain.
15/12/07 12:58 pm